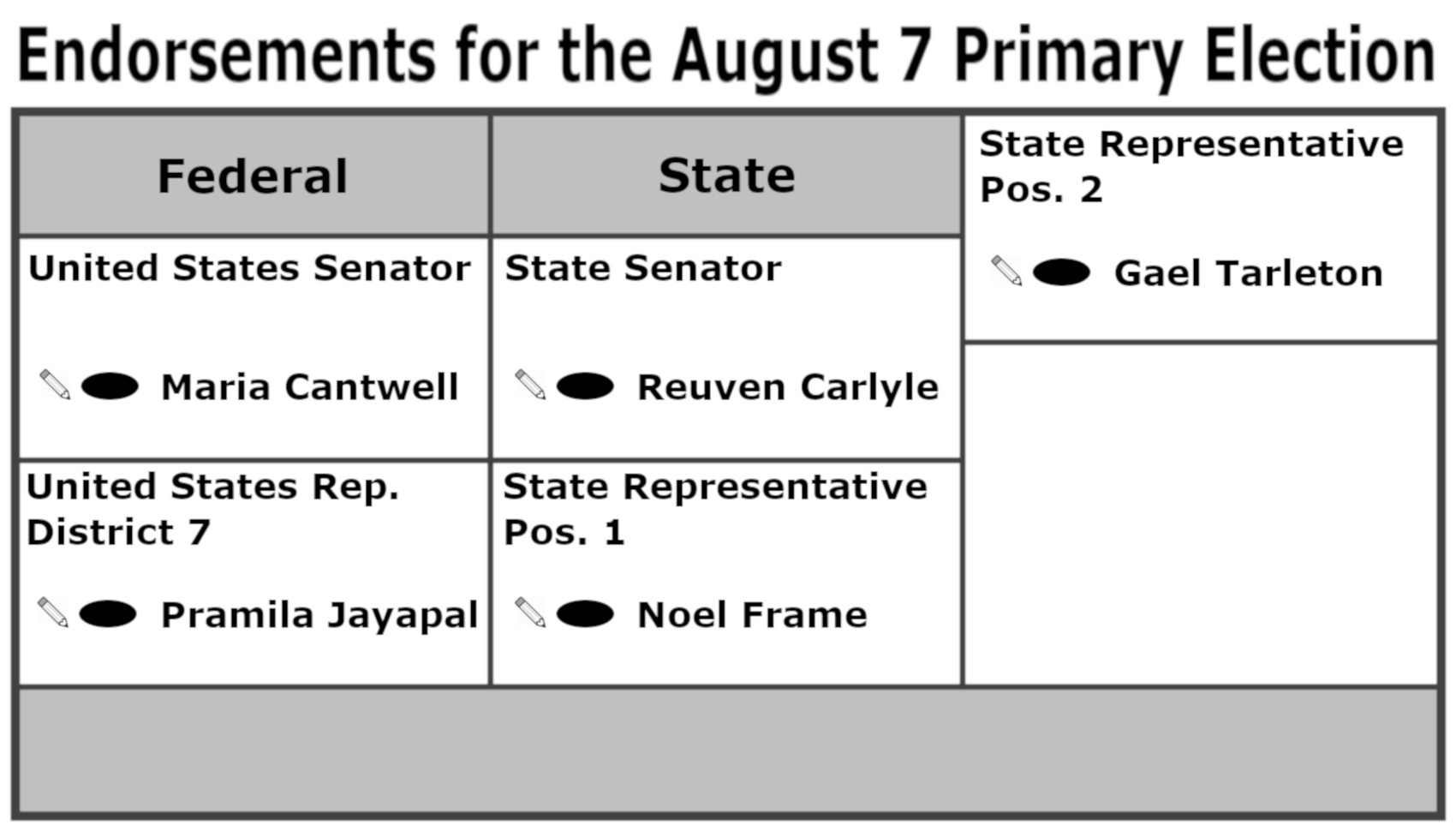 When deciding how you will vote in the August 7th Primary Election, I hope you will consider the endorsements of the 36th District Democrats. We carefully screen the candidates for experience, effectiveness, and adherence to the Democratic Party platform.

Our endorsement process is extensive and involves hundreds of hours by dozens of volunteers to help vet the candidates. For more information about our endorsements, read on below! Join the 36th District Democrats here.

Maria Cantwell for US Senate

Maria Cantwell currently serves as a United States Senator for the State of Washington. As a respected leader, Senator Cantwell has always embraced the values she first learned growing up in a strong working-class family. Senator Cantwell was elected to the U.S. Senate in 2000, 2006, and again in 2012, pledging to honor the hard work, aspirations, and faith of the people of Washington State. She is working to create affordable opportunities for consumers, businesses, and families, to make our nation more secure today, to foster innovation for tomorrow, and to stand with parents as they educate and care for their children.

Maria gets results. She cut taxes for the middle-class by ensuring that Washington taxpayers can deduct state and local taxes from their federal returns. When bankrupt Enron officials tried to charge Washington ratepayers for millions of dollars in undelivered electricity, Maria led the effort that successfully stopped them. Maria has protected countless jobs in Washington’s aerospace industry by cracking down on foreign companies’ unfair trade practices, and has worked to create still more well-paying jobs through effective investments in new technology and valuable job training. Maria successfully led the fight to stop drilling in the Arctic National Wildlife Refuge and is leading efforts in the Senate to make America more energy independent.

Pramila Jayapal for US Representative, District 7

Congressperson Pramila Jayapal came to the United States by herself when she was 16-years-old. Using their savings, her parents sent her to this country from her birth country of India. Here, she attended college at Georgetown University and went on to earn her MBA at Northwestern University. Congressperson Jayapal has a long history of grassroots activism before she was elected to Congress: She founded OneAmerica (formerly Hate Free Zone), in response to hate crimes and discrimination targeting the Arab, Muslim, and South Asian communities following the tragic 9/11 terrorist attacks; she successfully sued the Bush administration over Somali deportations, blocking 2,700 illegal deportations; she led an initiative to train 12,000 students and 1,000 teachers to engage in politics, through OneAmerica’s Youth Program; and helped lead the largest voter registration drive in Washington’s history, registering 23,000 voters in 2008.

As a congressperson, Pramila has been leading the charge to defend immigrants from the Trump administration, and was one of the first members of congress to go inside a detention center to visit detainees and learn their stories. We strongly recommend that you vote for Congressperson Pramila Jayapal.

You can watch Pramila Jayapal’s campaign manager, Sarah Brady, speak on her behalf on our YouTube channel.

First elected in 2008, Senator Reuven Carlyle chairs the Energy, Environment, and Technology Committee. He also serves on Ways and Means, Human Services, and Higher Education committees. As committee chair, Carlyle has been lead sponsor of sweeping carbon pricing and energy investment legislation. Carlyle was named by Governing Magazine as “one of 12 legislators to watch” and as one of the nation’s most “tech savvy” legislators by GovTech. He has been a leading voice in the Legislature for meaningful tax transparency and accountability, responsible gun safety laws, higher education, foster youth, and environmental and energy strategies.

Senator Carlyle recognizes that, in the years to come, we will have millions of new residents coming to the Puget Sound region and that we are not ready for this population growth. He sees that we face an affordability anxiety that is off the charts and need our elected officials to focus on the education, infrastructure, transportation, human services, and financial integrity of our state so we can ensure the quality of life for both those who already live here and those who are coming to our state. We recommend voting for Reuven Carlyle for State Senate.

You can watch Senator Reuven Carlyle’s endorsement interview on our YouTube channel.

Representative Noel Frame has served the 36th District in the Washington State House of Representatives since January 2016, and during that time she has tackled the biggest challenges Washington State has ever faced: fixing our regressive and inequitable tax structure and our broken school funding system. To do this, Frame recruits and supports candidates across the state, helping to build progressive coalitions in Olympia by traveling to swing districts to campaign for Democrats.

Frame was the prime sponsor of HB 2895, the sister bill of which (SB 6160) was passed by the legislature and was signed into law this year. That bill limited the number of crimes for which children can be tried as an adult for, preventing many young people in the criminal justice system from staying in that system for the rest of their lives and increasing their chances at rehabilitation and a more promising future. Given that 70% of the youth convicted as adults in this state are people of color, this legislation will help to reduce racial inequity in our adult criminal justice system in the long-run.

Representative Frame is working to change the laws that hold poor, sick, people of color, disabled, LGBTQ, or female people, so that all Washingtonians can thrive. This includes improving access to mental health services, reforming the criminal justice system, strengthening and expanding foster care and bringing a racial equity lens to everything we do, from climate justice to reproductive freedom to voter access.

You can watch Representative Noel Frame’s endorsement interview on our YouTube channel.

Elected in 2012, Representative Gael Tarleton has been a tireless advocate to bring better transit service to the 36th district. She was able to add $10 million to the 2015 Transportation Revenue Package, to expand bus transit on north-south and east-west transit corridors throughout the 36th and 43rd districts, especially to expand access to the highest concentration of low-income housing units along the Greenwood Ave corridor. These routes serve more than 2.3 million riders per year.

Representative Tarleton believes that we must transition the transportation sector and our electric grid from dependence on fossil fuels to clean fuels. Through legislation, budget provisos, and the public hearings process, she has launched a sustained legislative agenda to tackle climate impacts on all these fronts

Representative Tarleton is a healthcare advocate and co-sponsored legislation and voted to expand Medicaid health and adult dental coverage in 2013, guaranteeing access to healthcare for an estimated 1 million Washingtonians under the Affordable Care and Patient Protection Act. Since October 2013, nearly 500,000 previously uninsured residents of our state now have healthcare.

You can watch Representative Gael Tarleton’s endorsement interview on our YouTube channel. 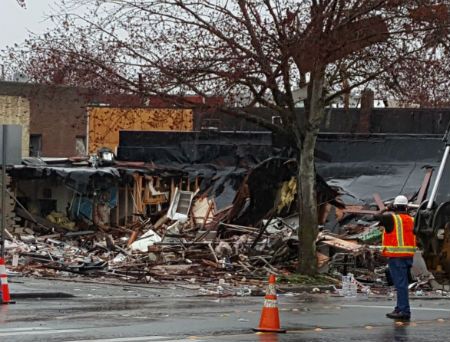 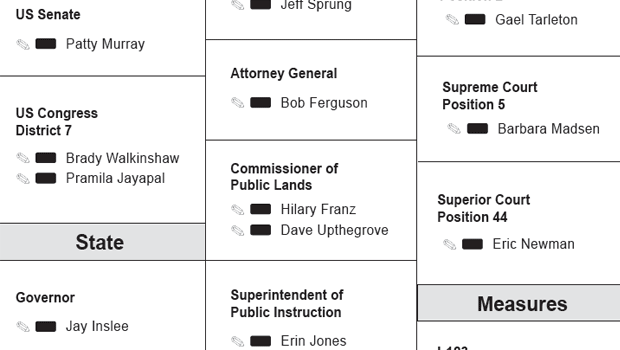 Endorsements & Voter Guide for the 2016 Primary! 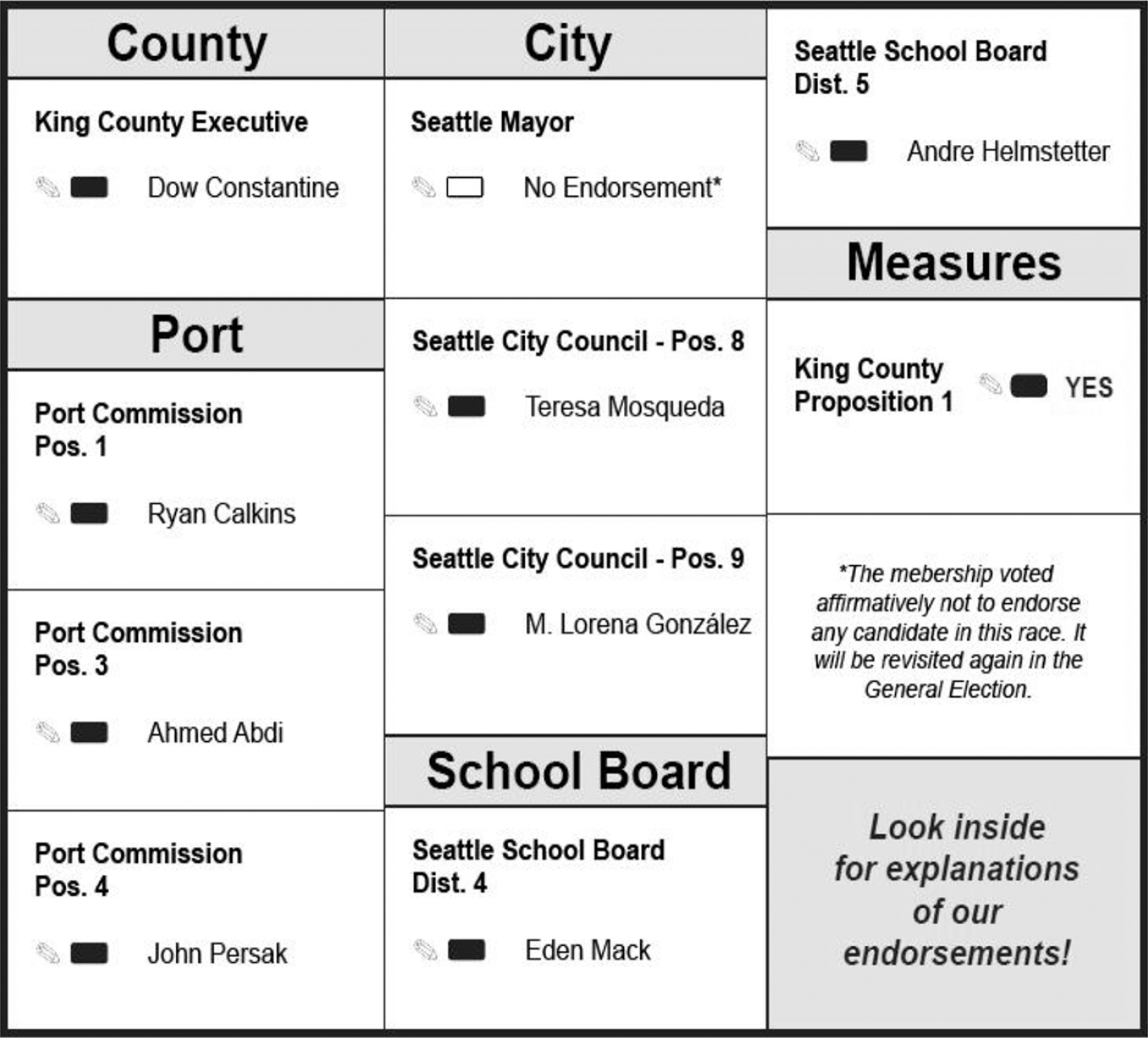