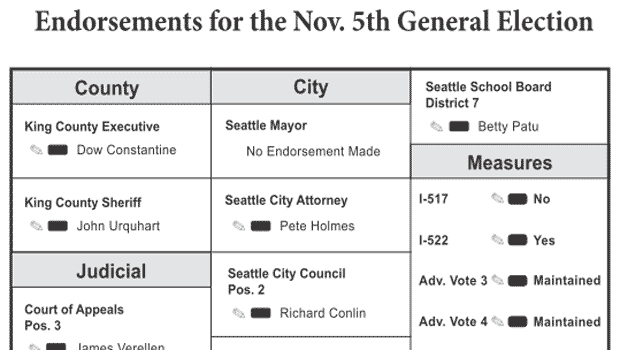 Download your own copy here and check out the full content of our voter guide below – and remember to mail in your ballot by November 5th! 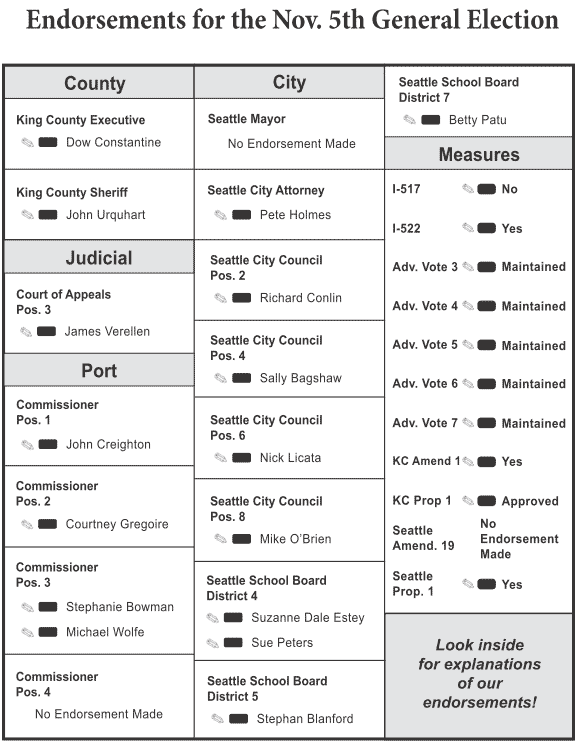 When deciding how you will vote in the November 5th General Election, I hope you will consider the endorsements of the 36th District Democrats. We carefully screen the candidates for experience, effectiveness, and adherence to the Democratic Party platform. We dive into the policy minutia of ballot measures to determine whether they reﬂect progressive values.

Our endorsement process is extensive and involves hundreds of hours by dozens of volunteers to help vet the candidates and ballot measures. 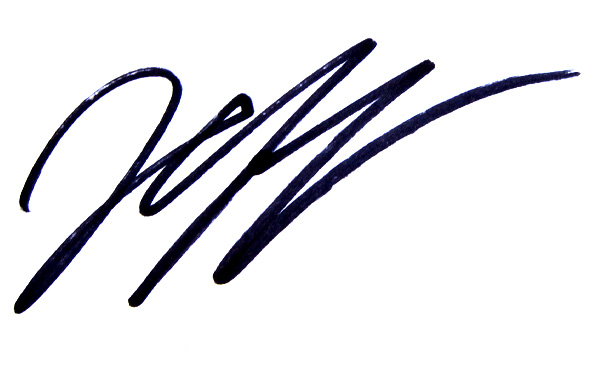 Dow Constantine has been an effective County Executive and he deserves re-election to a second term. He has built coalitions with the County Council, County employees, municipalities, interest groups, and the State Legislature to achieve an impressive list of accomplishments, including: securing funding for crucial infrastructure investments, implementing major efficiency improvements through technology and system reforms, and reducing County health care costs through a nationally-recognized employee wellness program. Vote to re-elect Dow Constantine.

John Urquhart, a 24-year veteran of the sheriff’s office, ran for Sheriff last year and won decisively in a special election to complete the term vacated by the former Sheriff. We endorsed Urquhart last year and are endorsing him again as he runs unopposed for a full four-year term. In his first several months on the job, John Urquhart has shown he has the law enforcement experience and administrative skills necessary for the job. He deserves reelection.

Judge Jim Verellen was appointed to Division I of the State Court of Appeals last year after the retirement of Judge Anne Ellington. He is now running in a special election to complete the last two years of the term. Prior to his appointment, Judge Verellen served with distinction as a Commissioner in the same Court for nearly two decades. He has been rated as “Exceptionally Well Qualified” (the highest rating) by all the specialty bar associations in King County. Judge Verellen is a fair-minded jurist who should be retained on the Court of Appeals.

John Creighton has served on the Port Commission since 2006 and has been a reliable vote for jobs and the environment. He has utilized his background as an international corporate lawyer to inform his oversight of a port that helps make Washington the most trade-dependent state in the nation. John Creighton has been an asset on the Port Commission and should be reelected to a third term.

Courtney Gregoire was appointed to the Port Commission earlier this year to fill a vacancy and is running for election to complete the term. She is a Harvard Law graduate and has had an impressive career as an attorney, working for Sen. Maria Cantwell, for the US Dept. of Commerce, and most recently for Microsoft. Courtney is running on a platform of creating and maintaining quality jobs while protecting the environment. We endorse her election to complete the four-year term to which she was appointed.

There are two strong Democrats on the ballot for the Port Commission – Position 3. Michael Wolfe is a travel professional and is Chair of the 37th District Democrats; he brings an expertise in air transportation and the cruise industry. Stephanie Bowman is the Executive Director of Washington ABC, a non-profit that assists low- and moderate-income families with asset building, and is the former Manager of Federal Government Affairs at the Port of Tacoma; she brings an expertise in seaport operations. Either candidate would serve us well on the Port Commission.

As City Attorney, Pete Holmes has effectively used his position as a platform to further progressive causes, including legalization of marijuana and reform of the Seattle Police Department. In his administrative role, he has increased transparency and ended costly and unnecessary outside contracts. Pete Holmes’ values and talents are well-suited to the City Attorney’s office and he is running unopposed for a second term. Vote to reelect Pete Holmes.

Richard Conlin is completing his fourth four-year term on the City Council and has convinced us that he should be re-elected to a fifth. During his 16 years on the Council, he has pursued a collaborative approach, developing an expertise in a wide array of City issues, having chaired most of the major Council committees and served four years as the Council President. He remains actively engaged in the community and is seen at countless neighborhood meetings across the city. Vote to reelect Richard Conlin.

Finishing her first four-year term, Sally Bagshaw has proven to be an effective leader on the council. As chair of the Parks and Recreation Committee, she led a reform of the community center system, saving $1.2 million and keeping the centers open when they were threatened by decreasing revenue in a difficult economy. She has also provided needed oversight of the Parks and Green Spaces Levy funds as the levy approaches the time for renewal. Sally Bagshaw should be reelected to a second term on the City Council.

Nick Licata has been a liberal champion on the Council since 1998, focusing on policies helping low- and middle-income families, from housing to consumer protection to social services. In his current term, Nick Licata sponsored an ordinance that made Seattle one of the first municipalities in the country to require employers to provide paid sick leave for employees. He also sponsored ordinances capping towing fees and providing for rental housing inspection. Seattle needs an advocate like Nick Licata to remain on the City Council for a fifth term.

Mike O’Brien spent his first term on the Council successfully advocating for progressive causes, especially concerning the environment, social justice, and campaign finance reform. While critics paint O’Brien’s pursuits as quixotic, we view his willingness to push the envelope as a breath of fresh air on a council that tends toward caution and incrementalism. Albert Shen, the other Democrat running for Position 8, is well-intentioned, but has not demonstrated a strong knowledge of city issues or clearly articulated why he is running for City Council. Mike O’Brien has proven himself in his first term and should serve another.

Two Democrats are running for District IV of the Seattle Public Schools board of directors this year: Suzanne Dale Estey and Sue Peters. Both currently have children in public schools and are highly qualified to serve on the school board. Suzanne Dale Estey has a background in public policy, intergovernmental relations, and economic development. Sue Peters’ background is as a journalist, communications strategist, and public education advocate. Either candidate would be a welcome addition to the school board.

Stephan Blanford’s passion for education is personal. As the first in his family to attend college, he recognizes the value of a quality K-12 education. Stephan went on to get a Ph.D in Educational Leadership and Policy Studies and a Masters of Public Administration from the University of Washington. He wrote his doctoral dissertation on school districts and would bring a unique expertise — both academic and practical — to the school board.

Betty Patu is finishing her first term on the school board after serving as a school district employee for 32 years. Throughout her career, she has focused her attention on at-risk youth and increasing graduation rates. Betty has receiving countless awards in recognition of her work, including but not limited to the Governor’s Volunteer Award, the Mayor’s Volunteer Award, and Senator Patty Murray’s Golden Tennis Shoe award. She is running for reelection unopposed and should continue her work in a second term.

Tim Eyman wants you to vote yes on Initiative 517. You should vote NO. I-517 would dramatically change the rules regarding signature-gathering for initiatives, clearing the way for Eyman’s lucrative business of policymaking by plebiscite to grow exponentially. Among other things, I-517 would establish a 25-foot radius around any signature gatherer in which any actions deemed a “deterrent” to signature gathering would be punishable as a crime and force private business owners and all public facilities to allow signature gathering in front of their entrances. While I-517 is shrouded in first amendment language, it would infringe on the free speech and property rights of others. Vote NO.

Initiative 522 adds a simple label to food products sold in grocery stores in Washington State. Foods that contain genetically engineered ingredients must include a label notifying consumers. Just like existing ingredient labels on food, the purpose of adding the GMO label is transparency so consumers know what is in the food they buy and make informed choices. We have a right to know what is in our food. While opponents (notably the multinational bioengineering conglomerate Monsanto) argue that the labeling would increase food costs and hurt farmers, this has not been the case in other countries. Sixty-four countries already require labeling of genetically engineered food and American food exporters already conform to those countries’ GMO labeling laws. I-522 would adopt the same international standard in Washington State. Vote YES.

While Tim Eyman’s requirement that any tax increase (including extending taxes or closing loopholes) receive a 2/3 vote in each house of the legislature was ruled unconstitutional, another provision of I-1153 remains: it requires any tax increase to go before the voters for a non-binding advisory vote. There were five such tax decisions in the 2013 legislative session, hence Advisory Votes 3, 4, 5, 6, and 7. (Advisory Votes 1 and 2 were in 2012.) All five of these tax votes involved narrow areas of the tax code, passed with overwhelming bipartisan majorities, and increased government revenue in an era of never-ending budget cuts. Although nonbinding, please vote to MAINTAIN these tax decisions.

In a recent class action settlement, King County public defenders were declared to be County employees as of July 1, 2013, ending many years of ambiguity regarding their employment status. Charter Amendment 1 effectively creates a County department for these new employees, providing appropriate checks and balances so public defenders can maintain their independence. This amendment to the County Charter is a technical fix which should be approved.

King County Proposition 1 is a renewal to the existing Medic One / EMS levy which provides necessary funding to save lives across the county. Please vote to APPROVE this levy to continue these vital services for another six years.

In the post-Citizen’s United era, the amount of big money in politics has exploded nation-wide and Seattle has not been immune. Campaigns for Seattle City Council now cost over $250,000, which makes it hard for qualified candidates to run for office without dialing for dollars from big money interests. Proposition 1 would provide matching funds for small donations raised by candidates who agree to limit their spending and participate in public debates, leveling the playing field and keeping our elected officials accountable to the voters. It is similar to successful programs used in San Francisco, Los Angeles, New York City, and elsewhere. Vote YES on Seattle Proposition 1.

The 36th District Democrats did not make an endorsement decision in the following races: Port Commission – Pos. 4; Seattle Mayor; and Seattle Charter Amendment 19. 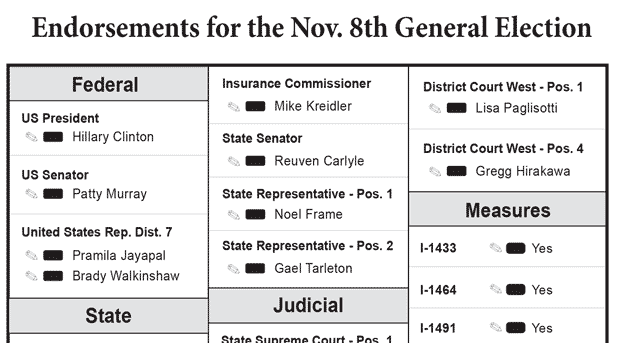 Endorsements & Voter Guide for the 2016 General! 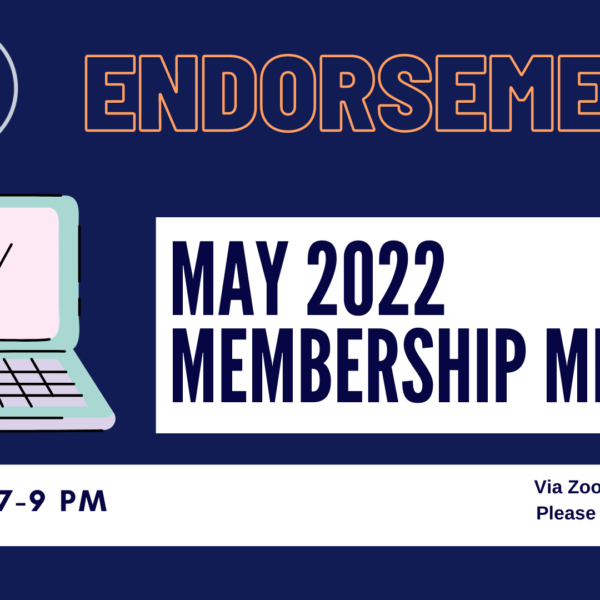 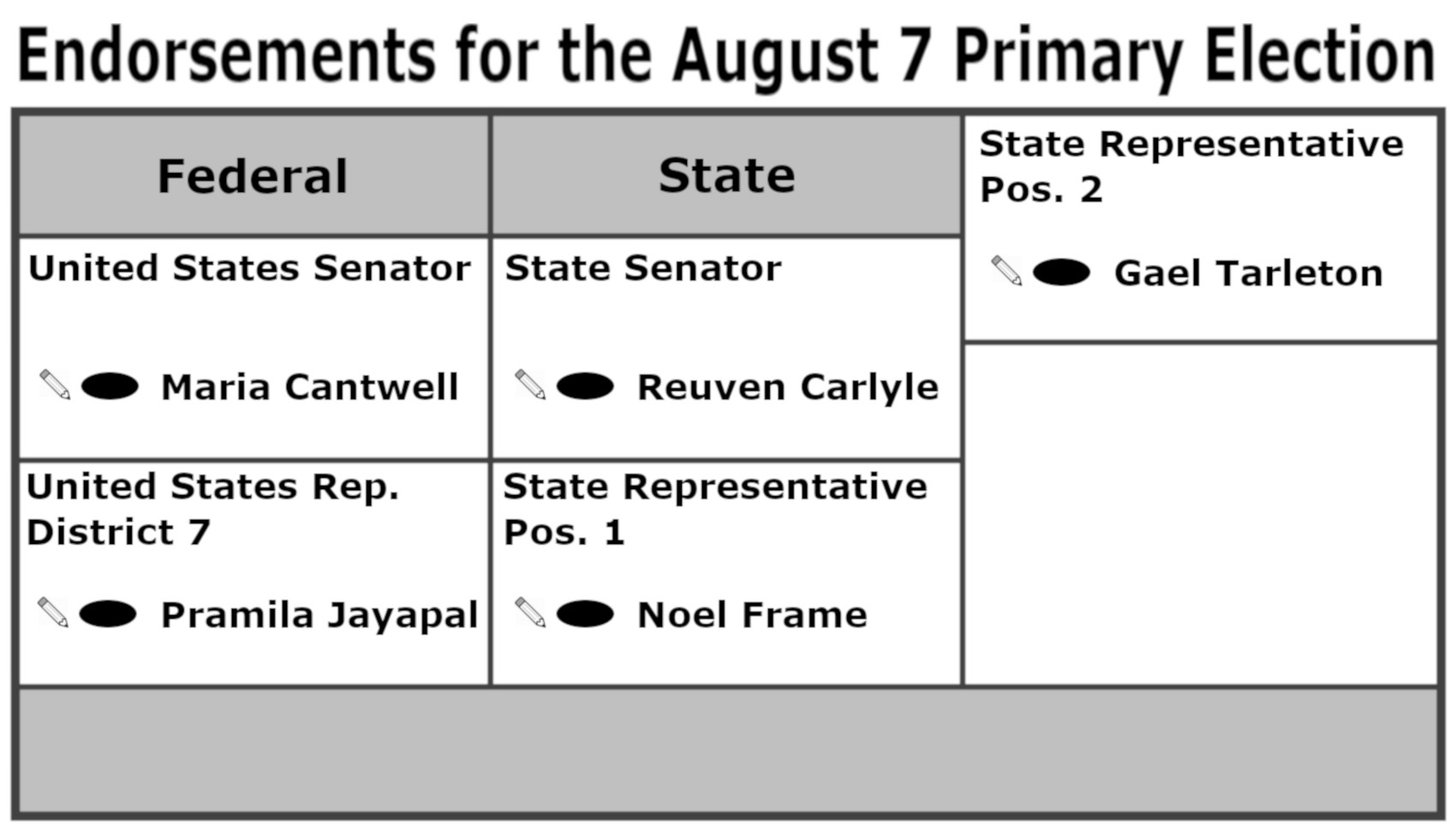